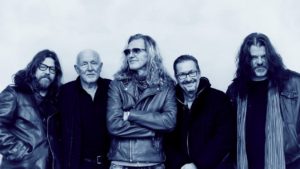 Back to the roots

Roine Stolt has been very busy in the past months, not only with his collaborations with Jon Anderson and Steve Hackett, but also with his revitalization of the 70ies legend Kaipa, due to Hans Lundins project to be called Kaipa daCapo. They will be on tour soon, good reason to talk with Roine about his new project.

German version of the interview

Kaipa released three symphonic classics in the Seventies. After changing their style drastically they disappeared in the early 80ies. At the end of the 90ies there was a plan to have a Kaipa re-union but at that time it failed. Why did it fail at that time and how did it happen that so many years later it worked?

Well, I suppose the time wasn’t right. Fact is, when there was talk about playing and record Kaipa music again – already in early 1990 Hans Lundin told me that he did not feel a full reunion with Ingemar and Tomas would work. We needed more “virtuoso” players. I realized after some time that the real Kaipa “sound” wasn’t there anymore – even if Morgan, Jonas and Patrick are very fine musicians. So all this led me to joining with Tomas, Ingemar again and we asked Michael (Stolt) and Max (Lorentz) to form Kaipa DaCapo. We aimed at a more organic sound – far from the “fixed” sequencer recordings” – we just play the music – natural – no clock or metronomes.

Have you tried to have the complete original line-up including Hans Lundin or was it clear that Lundin is keeping his own Kaipa version alive?

Yes – as said – we tried a few recordings around 1990 – in Tomas studio – but these recordings never saw the light of day – Hans Lundin felt the recordings were not up to the standard. So they were shelved. (a few songs I later transferred to be Flower Kings songs )

Now you have Max Lorentz on keyboards who’s contributing a perfectly fitting vintage keyboards sound. A new name for me – has he played in other prog bands before?

No – Max is a very established musician in Sweden, he has played and recorded the last 25 years with Sanne Salomonsen, Mats Ronader, Michael Rickford, Kim Larsen, Rolf Wikstrom, Tyla Gang etc. – He even had his own TV show some 15 years ago.

You started playing live first and later on released an album with new material. Was the plan to first start checking by live experience whether playing together again after such a long time would work and then decide to create new music?

Well, it was not meant to be more than a couple of shows – for fun – but it kept us going and it was indeed fun. I suggested we record new material as to be “relevant” to be up to date. It would be best to have new music coming out to show the band was “alive” 2016.

You’ve played the Loreley festival in 2015– what was your experience?

Yes – it was fun – but of course, now looking back maybe we should have waited – as the band sounds much better now. We get better all the time. – I’ve played Lorelei many times. 2 times with The Flower Kings, once with Agents Of Mercy and once with Transatlantic – so Kaipa DaCapo was the fifth time for me!!! – it’s always a nice festival. The meeting with other bands and business people alone is great – it is a great festival for prog.

When you started writing new material for Kaipa daCapo – was there any intention to re-create the atmosphere of the early albums or just to see where the collaboration leads to?
Yes, at least in my mind – I felt I did want it to be special , different from Steven Wilson, Ayreon, Big Big Train, Dream Theater or Neal Morse. I wanted it to be more of an old school affair – played live in the studio – with the eventual flaws – or “human touch” – just like any old Bowie, Yes or Beatles recording.

For me, it was an excellent idea to have Michael taking over the part of the lead singer (well, most of the parts). Did you start Kaipa daCapo as quartet or was Michael in the band right from the start?

We were asked to play a festival in Sweden – we were just drums, bass and guitar and I said “we need a lead singer” – Michael seemed like a good choice as he plays guitar, bass and keyboards too – a kind of a “swiss army knife” of a musician.

Like the Seventies version, you’re singing in Swedish. Was it a long discussion or decided very quickly? You might reach less people when not singing in English but maybe the reason was to be more authentic with the Swedish vocals? Was this a point in question? Or was it to just continue the story of the old band by keeping the vocals in native language?

I suggested it – I was thinking too many bands sound the same – too many sing in English – I’ve been in many of those bands. I thought that singing in Swedish would separate us from the rest. We want to be different.

The title of the album means (rough translation) „The Perpetual Insanity” or “re-occurring madness” ….sort of …….
A fitting title we think as this is what we see – the same old greed, same old wars, same old starvation and exploitation of the poor countries. The dumb down of population and distraction with silly TV shows etc. – Just look at USA – it’s frighteningly bad – So much of the album lyrics deal with that.

You’ll be touring in February and will also play in Germany. Have you ever played live in Germany with the Seventies Kaipa?

We have only played the festival at Lorelei. Other than that we have never played in Germany – so this will be interesting – we hope we have plenty fans from the old seventies albums.

Are there plans for continuing with Kaipa daCapo and produce a second album?

I would think at least one more album – then who knows – as long as it’s fun and the audience finds us interesting and buy – I can see no reason stopping. So yes, it could be an ongoing affair – until we’re too old – ha ha!

Now apart from Kaipa daCapo, what can fans of your music expect from you for 2017? Any other projects (solo or collaborations with other bands)? I remember there had been the idea of working together with IONA and another project with former Tull drummer Doane Perry – any news on that?

There have been many talks over the years , Dave Bainbridge/Iona , surely Doane Perry, John Wetton, and David Cross (King Crimson) , George Wadenius (Blood Sweat & Tears), Dave O’List and Steve Hackett of course. There is not enough time to explore all avenues. These are all very nice and talented people.

Of course, two names have to be mentioned: How did it happen that you’ve toured with Steve Hackett and how did the Anderson-Stolt album originate?

I’ve known Steve since 2009 I think – I’ve been asked to guest on his albums and on his Royal Albert Hall show – then my friend Nad Sylvan got the go´g singing with Steve. When Nick Beggs got busy with Steven Wilson, Steve needed a bass player – and Nad told Steve that I do play bass too – and I’m “great” !!! – I did 85 shows with Steve! Epic – playing those old Genesis songs and the “Voyage of The Acolyte” songs – I loved that!!

Jon Anderson I got to know better in 2011 when we did a show of Yes songs together on a Cruise in the Carribean. We even did songs from Topographic Oceans – I did some occasional recording for him on a demo before that – but we were not really in contact. It was great playing the old YES tunes – I think it gave him confidence I could play and did understand the way of YES music architecture. – Our record boss suggested the collaboration and Jon agreed the same day – we were in full swing when Jon sent me “f´demos” a few hours later. – It’s been a gas – and I’ve learned a lot. He’s one of the most unique musicians I’ve met – very kind – the most professional and now a good friend – we are now in then plans for a new album.

Are there any plans with regard to the Flower Kings? Is their status still on hold or is Flower Kings history?

No plan at the moment – but never say never. However chances are slim for the coming five years. But we have a new very interesting project for 2017 – we work very hard on the songwriting – and are just about to assemble the new “all star” band.

Latest news: Max Lorentz will not be playing the tour. What has happened and who will replace him?

Yes, there was a terrible accident – He played with a “punk band” “ – “Bitch Boys” – for fun – but there was a weird guy who did assault him on stage – and he broke his foot- terribly. It will take time for him to mend the injury – and we will have Lalle Larsson (Karmakanic) stand in – and as fans of progrock knows – Lalle is an amazing keyboardist and a “force” so it will be all good. It will be different – but it will be amazing – Lalle will add a new dimension.

No not really – I think we covered everything- real good! Thanx! 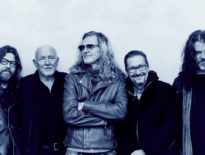 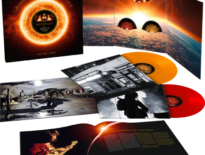