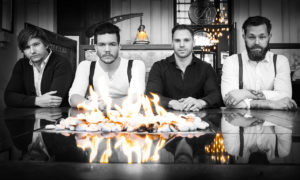 Another Norwegian band to be discovered is Oak from Oslo. There’s a connection to the better known Airbag – we’ll see below.

Would you please provide some key information on Oak?
Current line-up, discography etc.?

At the moment we are three full time members writing the music and doing most of the day to day work – Øystein Sootholtet (bass/programming), Sigbjørn Reiakvam (drums/programming) and Simen Valldal Johannessen (vocals/keys). 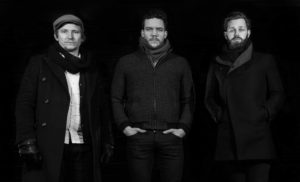 We also have two guitarists, Ole Michael Bjørndal – who`s also playing with Airbag – and Stephan Hvinden from Pymlico. We`ve been playing together for a few years now and we released “Lighthouse” on our own in 2013. We did the recording ourselves and got Jens Bogren from Fascination Street who did a great job mixing and mastering it. When we signed with Apollon Records we made some changes including new design and a guest appearance from Bjørn Riis (Airbag) and the album got a proper release in 2016.
Right now we are in the final stages of recording our second album, which will be released in 2018.

We find inspiration in most genres really. Everything from pop to death metal. Usually it`s pretty subtle, as we`re driven by bursts of inspiration, that often springs from travelling and experiences we have individually or as a group. Normally one of us has an idea, that he prepares to a certain degree and then brings to the table.

Our mission is for it to be intelligent, catchy and captivating at the same time.

We`re doing both, but we haven`t been able to perform live as much as we would want to up until now. We`ve played in Holland, and we would love to come back, and we`d love to visit Germany and Belgium as well of course! Send us an invite and we`ll come.

It`s growing and getting more interesting pretty fast really. It isn`t big, but something is happening and we`re glad to be a part of it.
We haven`t noticed or experienced a great deal of interaction or collaboration with the Swedes or Finns really – which is kind of a shame, as it would be a great asset to us all and help us gain momentum. Hopefully we`ll see more of that in the time to come.

The prog scene has been small and it still is, but something is happening, thanks to a couple of record companies, some radio shows and perhaps a reaction to generic pop music taking up more and more space in the media.

Our manager at the time introduced our music to Robin (Karisma, Apollon). He reached out and a few months later „Lighthouse“ was out.

We`ve written and released more music and established ourselves in the live scene. We`d love to be a part of the major prog scene internationally of course.
The prog audience thankfully seems to still be enjoying the physical format with photos, lyrics, background information and the whole package – and so do we. So we hope and believe that both CDs and vinyl will play a significant role in the years to come.

Oak from Oslo on their current activities 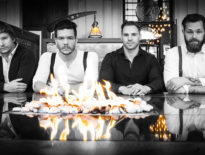 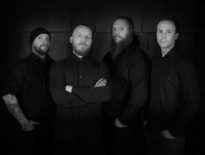